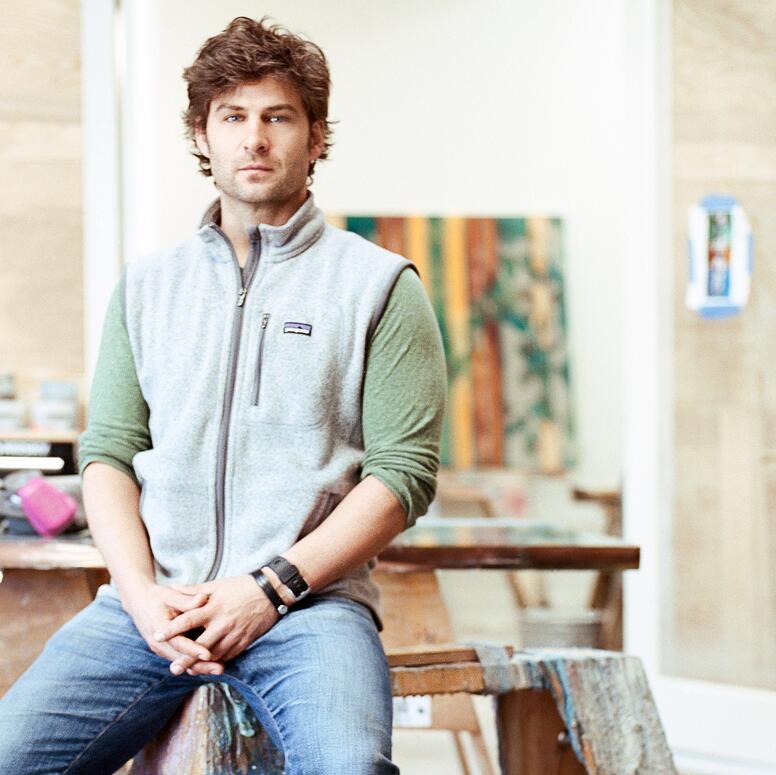 R. Nelson Parrish doesn’t recall a time in his life when he was not in motion. Growing up in Alaska, he spent his childhood charging down slopes, pedaling over ridge lines, swimming across lakes, and hiking into the back country. In his family, “playing hard was just a given”—so play hard he did.

This constant state of movement played a role in Nelson’s decision to pursue a career in visual art. “Interacting with the landscape brought a sense of clarity, focus, and ultimately, elation,” he explains. “It is flow theory to the nth degree. And I had that same sensation when I saw my first Gerhart Richter painting. There was an overlap in language and sensation. Honestly, I fell in love with it all—the art, the movement, the joy. And that is when I realized what I wanted to do: invoke that sense of elation in people, whether that be strictly through art, or by inspiring them to get out and explore the world.”

One way that Nelson chooses to explore the world is through the tradition of Misogi. Soon after being introduced to Misogi—“a mental and spiritual challenge wrapped in a physical package”—by his good friend Dr. Marcus Elliott, Nelson completed a 5-mile ocean swim. This was the farthest single distance he had ever swum: after this first Misogi, he was hooked.

“Having a Misogi be ‘extreme’ is not the point,” Nelson explains. “It is about challenging yourself in unexpected ways and performing to your absolute. Doing a 27-mile standup paddleboard crossing of the Santa Barbara Channel didn’t make me a good SUP’er. Hell, I don’t even SUP that much at all. However, the memory of that accomplishment helps give me clarity and focus whenever I get nervous about public speaking, entering into a new business deal, making a new exploratory body of artwork, or taking on an even bigger challenge—kids! My first one is due this December.”

It was this 27-mile paddle across the Santa Barbara Channel that inspired the art on the top deck of FluidStance’s collaborative project with Nelson, the limited-edition Artist Edition Level. Built to inspire and enable motion, this piece represents the water, light, movement, and energy of Nelson’s Misogi.

The Artist Edition Level was inspired by Nelson’s Misogi.

Completing these Misogis is only one of the ways Nelson finds inspiration; Nelson seamlessly weaves motion into his day-to-day life. Lately, you can find him trying his hand at mountain biking and underwater rock running. But despite his impressive physical accomplishments, Nelson is quick to remind us that engaging in physical activity doesn’t have to be a huge undertaking.

“The big trick to all of staying active is simply being active,” he says. “It doesn’t take much.”

Whether he’s completing a Misogi or simply choosing to forgo driving to work in favor of walking, Nelson is committed to living life in motion.

“Movement means a lot,” says Nelson. “It is a language, ranging from pure athletic prowess to the grace of walking toward the morning’s first cup of coffee. It is the collaboration between gravity, physicality, and intent.”

FluidStance’s collaboration with R. Nelson Parrish was born from our parallel purposes to inspire motion in people’s lives. Visit our site to learn more about our commitment to set the world in motion.