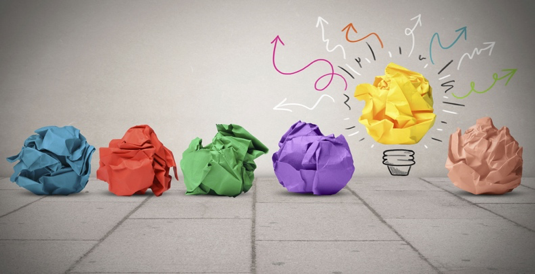 Creativity can be elusive… and that’s bad news for those of us who rely on our creativity every.single.day.  Just because we want and need to be creative doesn’t mean great ideas faithfully appear in our morning coffee. Sitting around all day forcing our brains into submission doesn’t seem to do the trick, either, because sitting kills your creativity. However, there is one faithful way to give the brain a creative boost. Many great minds came to their greatest ideas by tapping into their not-so-secret-muse: movement.

History is full of anecdotal evidence of how movement spurs breakthroughs.  Take, for instance, Henry Thoreau who famously said, “The moment my legs begin to move, my thoughts begin to flow,” or Friedrich Nietzsche, who wrote, “All truly great thoughts are conceived by walking.”  Even Sigmund Freud worked out his influential theory on the unconscious, preconscious and conscious minds during a series of long hikes in the mountains of Germany.

What we knew in the 1800s holds true today, and the research is starting to catch up. Researchers from Stanford recently found that a person’s creative output increased 60%  while walking. The study, published in the Journal of Experimental Psychology: Learning, Memory and Cognition, found that subjects not only provided more creative answers as they were walking, but also found that the positive effects lingered shortly thereafter subjects stopped moving. The study also found it didn’t matter whether you strolled indoors or outside – the creativity boost was the same. This insight makes the case for walking up and down the stairs as you listen in on conference calls, if that’s all you have access to.

In a separate study, researchers found that regular exercisers increased their creativity during problem-solving tasks after a short workout compared to their sedentary peers.  “Exercising on a regular basis may thus act as a cognitive enhancer promoting creativity in inexpensive and healthy ways,” study researcher Lorenza Colzato, a cognitive psychologist said.  Colzato and her colleagues from Leiden University in the Netherlands recently published their study in the Journal Frontiers in Human Neuroscience. Take a look at their fascinating findings on the link between movement and creativity here:

Power players are ditching their desks.

Even Barack Obama is a champion of bringing more movement into our work lives.  The President,  known for holding walking meetings along the South Lawn of the White House reportedly “paced the South Lawn loop as he awaited word on whether his administration would hit its 7-million target for health insurance sign-ups before the close of Obamacare’s first open enrollment period,” according to Fast Company.

Silicon Valley is quickly becoming famous for walking meetings too. While the late Steve Jobs popularized the trend, we’ve seen everyone from Mark Zuckerburg to Jack Dorsey ditch their desks for sneakers. Jeff Weiner, the CEO of LinkedIn, published a post recently touting the benefits of his fresh air moving meetings, stating, “A colleague recently advised trying walking meetings. Now there’s no turning back.”  With the help of celebrity status Presidents and tech CEOs, the active workday is starting to get some much needed traction. That inspiration, coupled with the a growing awareness on the dangers of sitting, means that more companies might start encouraging employees to get up and move as they work.

Creativity is an office chair casualty.

So what can you do about it? Simple. Move more. If you want that creativity “on demand,” it means cultivating as much movement as you can throughout your work day. If you’re stuck in an office where you just can’t go out for a run when you feel stuck, then try using a standing desk (we recommend an adjustable standing desk so you can still cop a squat during deep think time), trade conference rooms for walking or standing meetings, do sets of stairs while you’re on a phone call, or stand up on the subway during your commute. All of those small adjustments will help bring more movement into your workday. Share your tips with us in the comments or tweet us!